What is the maintenance method for the hydraulic system of mine roadheader? 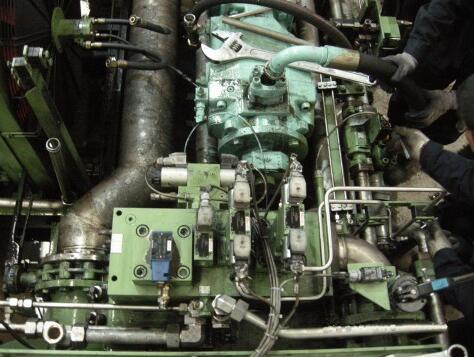 1. Mark the parts first
First of all, whether the repair is an electrical fault, a mechanical fault or a hydraulic fault. The cutting part of the roadheader is driven by the motor through the stage planetary gears. The fault type is only the electrical part and the mechanical part 2 type of fault, and it is relatively independent and easy to repair. The crawler, star wheel and cylinders are located in the same hydraulic system, and the pump and triple pump share the same drive motor and electrical control system. It is also easy to repair whether it is an electrical fault or other faults. When the electrical fault is eliminated, the action of the above parts can be used The progress of the situation and the pressure situation has narrowed down to the failure of the oil pump or the failure of certain parts. When repairing the operation and pressure of each part, first check the outside for obstacles, and measure the pressure of each oil circuit by selecting the valve.
Maintenance method of hydraulic system of mine roadheader

2. From parts to components
After determining the location, according to the phenomenon of the fault, use the causality diagram hydraulic system diagram fault tree analysis, pressure parameter analysis component replacement and isolation to find the rest components one by one, that is, the fault point, such as according to the cutting machine can not swing up and down and then operate Lower the left and right swing cylinders, if it is normal, it means that there is no problem with the common parts such as the double left pump. At this time, you should first check whether the connecting parts of the jack are normal, then check whether the outer part of the height-adjusting jack is deformed, whether the joint is leaking, and then check the control valve. If the control valve is normal, check the pressure control valve and check valve.